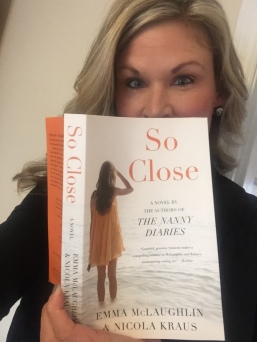 Basic Description: Amanda Beth Luker has spent her whole life desperately looking for someone who can show her the way out of her trailer park Florida town. And then, finally, help arrives―in the form of Tom Davis, a successful lawyer with political aspirations who grew up just a few towns over from Amanda.

But it’s his wife, Lindsay, who really captures Amanda’s imagination. Strong, smart, and determined, she gives Amanda something she’s never had―a role model. Meanwhile Amanda is introduced to the wealthy, charismatic, and deeply troubled Pax Westerbrook. He clearly desires Amanda, but if she gives in will that move her closer to the life she’s always dreamed of―or make it impossible?

Amanda rides Davis’s political success all the way to Washington, where he becomes Senator and will later be tapped for president and even make a bid for the White House. But when Amanda starts to suspect, and later confirms, his moral indiscretions, her loyalty is tested. Will a girl from a trailer park even be believed if she goes public with damning information? Will she be willing to risk losing everything she’s gained?

Arden’s Thoughts: Wow… Amanda’s a gal trying to grab an opportunity and yowza does it bite her in the fanny; more than once. But, our plucky protagonist knows how to keep going and make life work for her… by the end of the book.

Throughout So Close we watch Amanda grow in confidence and character. We begin with her unjustly losing a job she loathes and slinking back to her hometown trailer. While there, she learns her mother is pregnant (again) by yet another man (who leaves her again) and Amanda makes a commitment to do better; be better. She wants to make smarter choices and eventually bring stability to her life and her family’s.

Thus, we also dive into the incredibly gray world of politics and love. Amanda meets Tom & Lindsay Davis, an up-and-coming political couple with dreams to change the world and the money to make those dreams a reality. She also connects with Pax Westerbrook. A wealthy and troubled man who wants love, but also feels pressure from his family to select the right woman.

Amanda tosses and turns throughout the novel. We’re enraptured by her story and find ourselves wondering where she find herself next. McLaughlin and Kraus, best known for the Nanny Diaries create a story you can’t put down and characters you’ll love, or loathe from beginning until the end.

One thought on “Arden Reviews: So Close by Emma McLaughlin & Nicola Kraus”